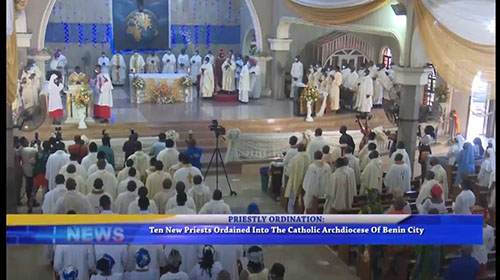 The ceremony, which was held today at Holy Cross Cathedral, Benin City was performed by the Catholic Archbishop of Benin Metropolitan See, Most Reverend Augustine Obiora Akubeze.

Roseline Ebhoramen reports that the priestly ordination was graced by the deputy governor of Edo State, Comrade Philip Shaibu, and dignitaries from all walks of life.

This post was written by Tonni Etim and was first published at www.itvradiong.com
Organisation raises alarm of prostate cancer among Nigerian men, flags off IRONMAN project in Nigeria