#EndSARS: Company Explains Why Billboard Was Turned Off At Lekki Toll Gate

#EndSARS: Company Explains Why Billboard Was Turned Off At Lekki Toll Gate 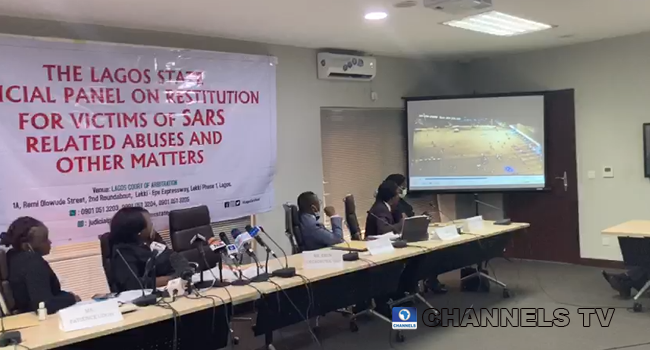 Loatsad Promo-media Ltd, the company that manages the billboard advertising at the Lekki Toll gate concluded its testimony on Saturday before the Lagos State Judicial Panel on restitution for victims of SARS related abuses and other matters.

Last week, the Company Secretary, Abimbola Eniola appeared before the panel in response to summons issued on it to come and assist with the investigations into the incident of Oct 20, 2020.

Under cross-examination on Saturday by Adesina Ogunlana, counsel to some of the #EndSars Protesters, Mr Eniola said the billboard at the Lekki toll gate does not serve the purpose of illuminating the toll-grounds.

The witness was answering questions as to who gave the order for the billboard to be turned off.

The advert company had come under criticism on social media for turning off the billboard and throwing the Lekki toll gate into darkness which allegedly provided cover for Soldiers to open fire on the #EndSars protesters on the night of Oct 20, 2020.

Counsel to some of the protesters, Mr Ogunlana specifically asked the witness, “Who gave the order to switch off the billboard?”

In his response, Mr Eniola said, it was the head of Human Resources, Chisa Olabode via the workers’ Whatsapp group chat who gave the directive to turn off the billboard following the state wide curfew announced by Governor Babajide Sanwo-Olu.

He said that after the HR circulated, on the WhatsApp group, the notice of curfew imposed by the state government, the billboards were shut off as members of staff vacated the office by 3pm in order to get home before the initial 4pm announced for the curfew.

A second witness, Serah Ibrahim, who had testified that at least 12 people were killed at the Lekki tollgate failed to appear before the panel today on account of ill-health.

A third witness, Dr Ayobami Aranmolate of Grandville Medical Centre, told the panel that the Medical and Dental Council of Nigeria was not happy that he had divulged certain confidential records of patients at his last testimony.

He pleaded with the panel to order the television cameras to be turned off before he could give his testimony. The panel obliged his request and ordered that his testimony not be recorded.

This post was written by Solomon Elusoji and was first published at www.channelstv.com
ARISE NEWSDAY