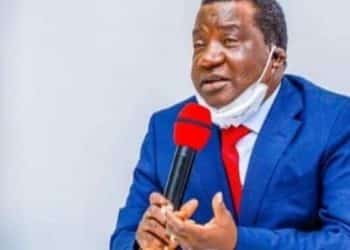 Governor Bako Lalong of Plateau State has warned trouble makers bent on fomenting trouble in the State to desist as the Government will not allow any form of lawlessness to disrupt the peace of the State.

Governor Lalong, gave the warning while reacting to the reported skirmishes around Rukuba road general area in Jos where some persons were reportedly killed including innocent commuters.

He condemned the act and immediately directed security agencies to swiftly identify and arrest the perpetrators.

Lalong said the attacks on innocent citizens no matter their backgrounds will never be tolerated in Plateau State and those who are found to be behind such attacks will be dealt with decisively to serve as deterrence and restore public order.

The Governor however commended the security agencies for their immediate response leading to the arrest of some suspects and the restoration of calm to the area.

While commiserating with the families of those affected, the Governor assured all law-abiding citizens that security has been beefed up around the area as well as the entire metropolis to forestall further breach of the peace.

He urged the residents to remain vigilant and be security conscious in reporting suspicious persons and behaviour within their domains to enable law enforcement agencies to respond appropriately.

Meanwhile, the Governor has directed the Secretary to the Government of the State Prof. Danladi Abok Atu to visit the areas and ascertain the situation as well as ensure that those injured receive adequate medical attention.

This post was written by Kamang Maitala and was first published at ait.live
Banditry: No Plan To Shutdown Telecoms In Kaduna – Govt