Incendiary Balloons From Gaza Cause Fires In Israel

Incendiary Balloons From Gaza Cause Fires In Israel 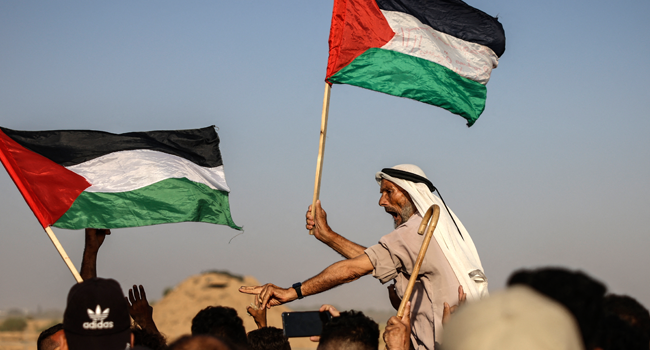 Israeli firefighters on Saturday were working to put out blazes sparked by incendiary balloons launched from the blockaded Gaza Strip.

Two wildfires broke out in Israel’s southern Eshkol region near the Palestinian enclave, firefighters said in a statement, adding that experts had concluded that the source was “incendiary balloons”.

Launching the makeshift devices is a common tactic of Palestinian militants in the Gaza Strip.

Earlier in the day, Gaza’s health ministry said a 12-year-old Palestinian boy shot last week by Israeli soldiers during clashes along the enclave’s border had died of his wounds.

The August 21 unrest left around 40 people wounded, according to Gaza’s Hamas rulers, including a 32-year-old Palestinian man who died on Wednesday.

An Israeli police officer was also shot and remains in a critical condition.

Taliban Blocks Kabul Airport to Most as Foreign Airlifts Wane

Following the clashes, Israel carried out air strikes it said were targeting weapons manufacturing and storage sites of the Islamist group Hamas.

New clashes took place on the border between Gaza and Israel on Wednesday, but they were less violent than those on August 21.

Further demonstrations were expected on Saturday evening after calls from several Palestinian factions, in particular to protest against Israel’s almost 15-year-long blockade of the territory.

Israel has launched several strikes on Gaza in response to incendiary balloons since a May 21 ceasefire ended 11 days of deadly conflict between the Jewish state and armed groups in the enclave.

This post was written by Solomon Elusoji and was first published at www.channelstv.com
AFCON 2021: Nigeria to Play Egypt, Holders Algeria Face Ivory Coast