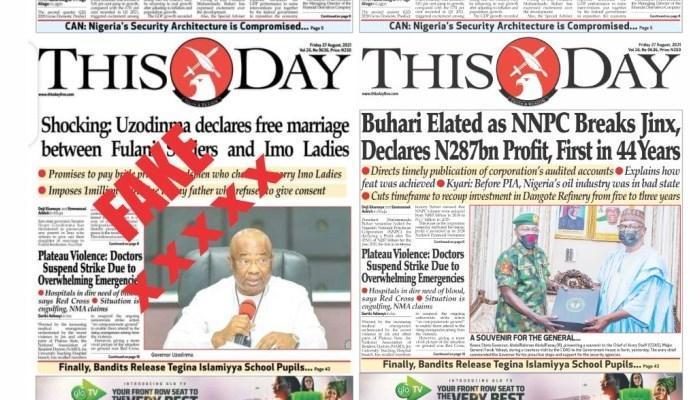 Governor Hope Uzodimma of Imo State has nothing to do with the purported report on a cloned publication of THISDAY of Friday, August 27, 2021 with headline: ‘Shocking: Uzodimma Declares Free Marriage Between Fulani Settlers and Imo Ladies …Promises to pay bride price for herders who choose to marry Imo ladies… Imposes N1m fine to any father who refuses to give consent.

A statement signed by Oguwike Nwachuku, chief press secretary to Uzodinma, said that the originators of the fake publication had two things in mind, “To tarnish the image of the governor and to destroy the credibility of THISDAY as a brand.”

According to the release, “The ill conceived publication shows how desperate individuals and groups can get in trying to destroy the society, thinking that Governor Uzodimma is the issue.

Nwachuku emphasised that “It is pertinent to note that THISDAY management confirmed that the publication was cloned and we are confident that they will not allow their hard-earned brand and efforts of many years to be bastardised by criminal minded fellows.

“Governor Uzodimma is conscious of the efforts being made by some individuals and groups to tarnish his image and discredit his government but will not be deterred in his determination to provide good governance to the good people of Imo State.”

The release further stated that “He is mindful of the enormity of work to do in Imo State after many years of neglect of critical infrastructure due to poor governance and will stop at nothing to change the narrative for good in the interest of the people.”

He urged the public to disregard the cloned publication as “coming from depraved minds and enemies of the people and the society.”

This post was written by Zebulon Agomuo and was first published at businessday.ng
APC fixes date for state congress