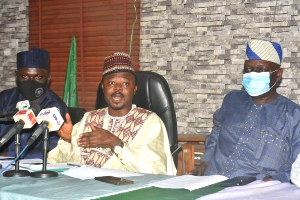 The Lagos4Lagos Movement and other aggrieved groups of the APC in Lagos State,  were absent at the party’s  LGA Appeal Committee Stakeholders’ meeting held on Thursday.

The News Agency of Nigeria (NAN) recalls that the Lagos4Lagos Movement, an aggrieved  group within the Lagos Chapter of APC, held parallel ward and local government congresses at different locations, at the APC  nationwide congresses on July 31 and Sept. 4 respectively.

The group, and others like- the Conscience Forum, the AAMCO and Democrat political group within the party, had alleged impunity, imposition and marginalisation in the party as the reason for their actions.

However, unlike the outcries and petitions at the APC ward Congress Appeal Committee Stakeholders’ meeting and sittings in August by these groups, they conspicuously boycotted the LG appeal committees stakeholders’ meeting held at party secretariat.

The Chairman of the five-man APC LGA appeal committee, Alhaji Ibrahim Akaje, early on Thursday told newsmen prior the stakeholders’ meeting that the committee was yet to receive any petition despite the parallel congresses held.

Addressing the party executives at the stakeholders’ meeting, Akaje said the committee was available to listen to all genuine complaints from members arising from the party’s local government congresses in the state.

“We are here again as arbiters. Essentially, our task is to objectively adjudicate , any grievances that may  have arisen from the conduct of the recently held local government congress in the state.

“As key stakeholders of the APC, I therefore consider it incumbent on you to bring to bear, your wealth of experiences and political sagacity on the process of arbitration which the committee will commence,” he said.

According to him,  adoption of consensus principle as provided in the APC Constitution and Guidelines for the 2021 Congresses,  has  been a huge success.

Akaje noted that all aggrieved members were expected to submit their grievances at the state secretariat of the party for the committee to work with at its arrival.

The chairman, who noted that the committee had until Saturday to hear all grievances, said report of the ward congress appeal committee had been submitted to the APC national secretariat.

He urged both the State Caretaker Committee of the party and the state government to facilitate sincere resolution of  all grievances.

“The APC is a valuable political asset in today’s Nigerian political system.

“Indeed, the mass of our people will not forgive us if we fail to harness the political process that is embedded in the APC to make Nigeria a paragon democracy,  particularly for the African continent,” he said.

The chairman assured that all issues raised by stakeholders at the meeting would be addressed during the hearing,  holding at the Conference Room of the party secretariat.

NAN reports that all efforts to get Mr Olajide Adediran, Leader of the Lagos4Lagos Movement to speak on the boycott were  abortive as calls to his phone lines were not taken.

However, Adediran had on Sept. 9 told NAN that if the issues that gave rise to the parallel congresses were not urgently addressed by the party at the national level, it would affect upcoming elections. (NAN)

This post was written by David O Royal and was first published at www.vanguardngr.com
No space for Makinde in our party — Oyo APC tells Fani-Kayode