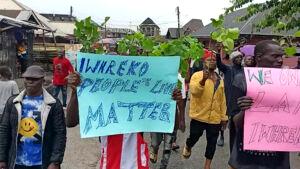 The people of Iwhreko community in Ughelli have called on Governor Ifeanyi Okowa to come to their rescue as their lives were in danger from arrest threat issued by their monarch and unprovoked violent attacks by Ekiugbo people.

The SOS call was made by the President-General of Iwhreko community, Mr. Godwin Onabedje, on Wednesday, while addressing journalists at the community town hall.

He recalled that last week Thursday, September 16, Ekiugbo youths ambushed and sporadically shot at Iwhreko youths who were celebrating the Ihenrin cultural festival, killed one and wounded many who were in critical condition.

The people then protested the unprovoked attack to the palace of the Ovie, carrying the corpse.

The next day, instead of showing concern over the series of unprovoked attacks by Ekiugbo on Iwhreko people, the king issued a letter commanding the Iwhreko people to cleanse his palace, which he claimed was desecrated by the presence of a corpse.

The letter, signed by the Ovie royal secretary, Oderohwo Solomon, read: “HRM has given you three days to cleanse the Ovie Palace on or before September 31 for bringing a dead body to the gate of the palace.

“Failure to adhere to the instruction shall lead to arrest.”

The letter was specifically addressed to six members of the Iwhreko community namely: Onabedje Godwin, Samson Abudu (a victim of gunshot who is between life and death), Mama Gabmas Emariovwore, Mama Patricia Arigo Akpowevwe, Austin Odugbo Okirhieri and Daniel Uloho.

In response, the six took the matter to court and instituted a case in Suit No UHC/152/2021 seeking enforcement of their fundamental human rights and praying the court to declare that among others, the threat of arresting the applicants over the cleansing of the respondent’s Palace was illegal, unconstitutional, unwarranted and a calculated act to infringe the applicants’ fundamental right to personal liberty, dignity of person, freedom of thought, conscience and religion and freedom of movement.

Onabedje said it was consequent upon the court notice that the monarch, in court contempt, mobilised the women from various parts of the kingdom to confront and invoke a curse on the Iwhreko people.

But on arrival, the women could not cross over the traditional straws running across the entrance of the community and had to return home.

Iwhreko people in their numbers then gathered at the community hall from where they staged a protest march within the community, calling on Governor Okowa to come to their rescue.

Some of the placards read “We say NO to oppression,” “We own the land on Iwhreko Market,” “Iwhreko people’s lives matter,” “Okowa come to our rescue,” among others.

“We cry out to Governor Okowa and to the world to come to our help. A king is not supposed to lie against his subjects.

“Somebody was killed; I don’t even know the person. He was not an indigene of Iwhreko and the king is alleging that I desecrated his Palace.

“Governor Okowa, please, come to our rescue before we are all killed,” the President-General of Iwhreko community begged.

Contacted to explain the content of the letter signed by him, the royal palace secretary, Oderohwo Solomon said: “I don’t understand the whole thing.

“I was only directed to write. But dropping a dead body at the gate of the palace is a bad omen.”

This post was written by Oboh and was first published at www.vanguardngr.com
Chelsea’s Reece James loses Champions League medal to burglars