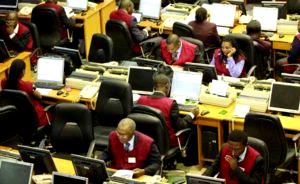 Data on domestic and foreign portfolio participation in equity trading released by the Nigerian Exchange Limited (NGX) showed that total withdrawal by the foreign investors rose sharply by 82.3 percent to N14.64 billion from N8.03 billion in July.

Further analysis shows that total transactions at the nation’s bourse decreased marginally by 0.39 percent to N89.42billion in August from N89.77billion in July.

Investment analysts at EFG Hermes, an investment banking firm, had expressed some reservations in the prospect of early recovery in the market, saying: “We do not expect a serious recovery in foreign appetite until the macroeconomic policy becomes less defensive. The company said: “First, we remain wary of the fact that Nigeria has failed to build reserves so far this year despite a very elevated oil price environment hence making the one-off boost of USD7.5bn less reassuring in terms of providing a sustainable foreign exchange (FX) position.

“Second, and beyond the external position, the current administration has consistently avoided much-needed structural reforms, which has resulted in a notable deterioration in its macro prospects. These include rising fuel subsidies, low non-oil revenues, deteriorating security conditions and an unconventional monetary policy fixated around FX stability. Resolving the FX situation is therefore only one step of many needed to boost Nigeria’s economic growth prospects”

A further analysis of the total transactions executed between the current and prior month in July 2021 revealed that total domestic transactions decreased by 13.71 percent to N64.06 billion from N74.24 billion in July.

Breakdown of the trading figure showed that retail transactions decreased by 15.16 percent to N31.89 billion from N37.59 billion in July 2021 .

Similarly, the institutional composition of the domestic market decreased by 12.22 percent to N32.17 billion in August from N36.65 billion in July 2021.

This post was written by Urowayino Jeremiah and was first published at www.vanguardngr.com
Policy somersaults drive auto industry off the roads