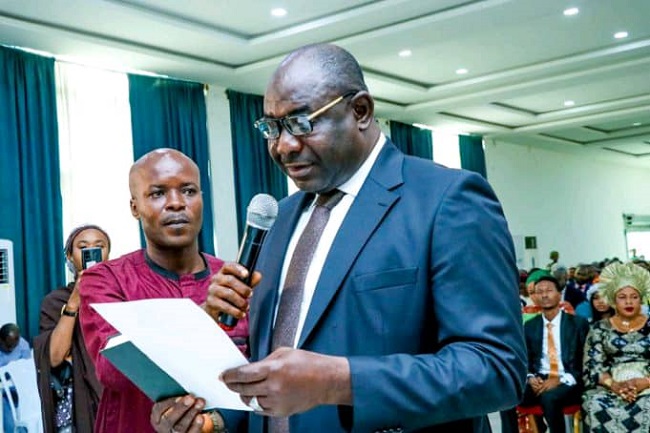 Hon. Justice Richard Olorunfemi has been sworn in as the fifth Kogi State Chief Judge, with a call on him to uphold the dispensation of justice without fear or favour.

Hon. Justice Siyaka Momoh Jimoh Usman was also sworn in as the President of the Customary Court of Appeal.

Justice Richard Olorunfemi was administered the oath of office at exactly 10:58 a.m. while Justice Siyaka Momoh Jimoh Usman took his turn at 11:15 a.m. after a brief citation of the Justices was read by the Secretary to the Government of Kogi State, Dr Folashade Ayoade Arike.

Performing the swearing ceremony at the Glass House of Kogi State Government House, Gov. Yahaya Bello charged the newly sworn-in officers to uphold the highest level of decorum, and ensure quick dispensation of justice irrespective of who’s ox is geared.

The governor who was represented by his Deputy, Chief Edward Onoja, assured that the state government will continue to ensure that the welfare of the Judiciary is made a topmost priority.

Governor Bello described the Judiciary as an equal arm in government and administration, assured of non-interference in the discharge of the duties of the Judicial arm.

While noting that the newly sworn-in officers are people of immense character and qualifications to pilot the affairs of their offices, urged them to bring their considerable history to bear in providing excellent leadership.

In a remark, Justice Olorunfemi who spoke on behalf of the newly sworn-in Justices, assured of their utmost discharge to the quick dispensation of justice, promised to make the state proud.

In spite of the huge investment in the water sector by the government and international organisations, water scarcity has grown to become a perennial nightmare for residents of Abeokuta, the Ogun State capital. This report x-rays the lives and experiences of residents in getting clean, potable and affordable water amidst the surge of COVID-19 cases in the state…  Gov Bello swears in Justice Olorunfemi as Kogi Chief Judge

This post was written by Yekini Jimoh – Lokoja and was first published at tribuneonlineng.com
At 30, Kogi is safest state with 2nd lowest crime rate ― Gov Bello