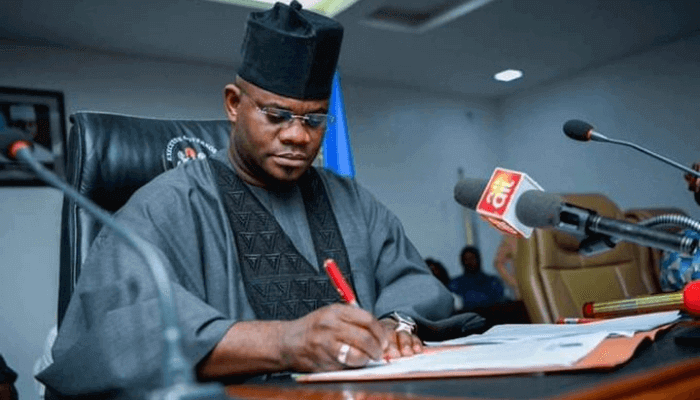 The International Fund for Agricultural Development (IFAD) has commended Yahaya Bello, governor of Kogi State for the progress it’s made in its Agricultural Value Chain Development Programme (VCDP-AF) implementation.

Mariatu Kamara, IFAD-VCDP country programme officer, gave the commendation when she led a team of delegation on the “9th IFAD mission visit To Kogi State” recently, noting that the IFAD-VCDP started in six states and because of its successes, the Federal Government requested that it be extended to three additional states which included Kogi based on the additional financing (AF).

She pointed out that Kogi had recorded successes in terms of achieving the objective of VCDP, and was one of the first States to provide its counterpart funding at inception.

“However, we noticed that in 2021, we have not received any counterpart funding from Kogi. We are drawing the attention of the state government to it, so as to ensure smooth execution of VCDP programmes in the state,” she said.

“We will like to continue to pledge our continued support particularly in the agricultural sector as we know Nigeria could actually become the food basket of West Africa if the sector is developed”, she said.

She commended the State Government for its support since its inclusion, and appealed for continued support for the benefit of rural farmers especially women and youth, as she assured that the supervision visit would guide IFAD in trying to ensure that the project meets its development objectives.

”We look forward to proper supervision mission with recommendations that would advance the implementation of the VCDP programmes”, Kamara said.

In his remarks, Gov. Yahaya Bello, applauded the federal government and IFAD for including Kogi as one of the three new benefitting states in the country.

Represented by his Deputy, Edward Onoja, appealed to the IFAD-VCDP team to add council to the five benefiting local government areas in the state.

“Lokoja, Ajaokuta, Olamaboro, Ibaji and Kabba-Bunu, are the only five Local Governments Areas currently benefiting in the IFAD-VCDP in the state, adding that Kogi would justify its inclusion, as the administration had carried out need assessment for the 21 LGAs of the state upon assumption of office”.

He stressed that women and youths in rural areas had shown capacity to add value to agriculture to earn more income and turn around the state for the better.

Governor Bello thanked the team for their commitment and assured them of the government’s preparedness to give them the necessary support at all times.

He assured the team of adequate security during their visit, saying the administration had invested so much in the sector.

Speaking also, David Apeh, the state commissioner for Agriculture, said the governor attached great priority to food security and poverty reduction in the state, adding that within a relative short period of VCDP implementation in Kogi, a lot had been achieved to boost food security and enhance the social economics status of the rural farmers.

The commissioner equally pointed out that government through the IFAD- VCDP had provided farm inputs ranging from fertilizers, seeds and chemicals to over 800 rural farmers in the state.

Stella Adejoh, Kogi State coordinator, IFAD-VCDP Programme, thanked the deputy governor for taking his time to receive the team, while appreciating the team for the choice of Kogi State, adding that VCDP was achieving its mandate in Kogi; assisting rural farmers to enhance their capacity, income and ensure food security through production, processing and marketing.

This post was written by Victoria Nnakaike and was first published at businessday.ng
Daystar Power commissions 800kWp solar power system for UAC Foods