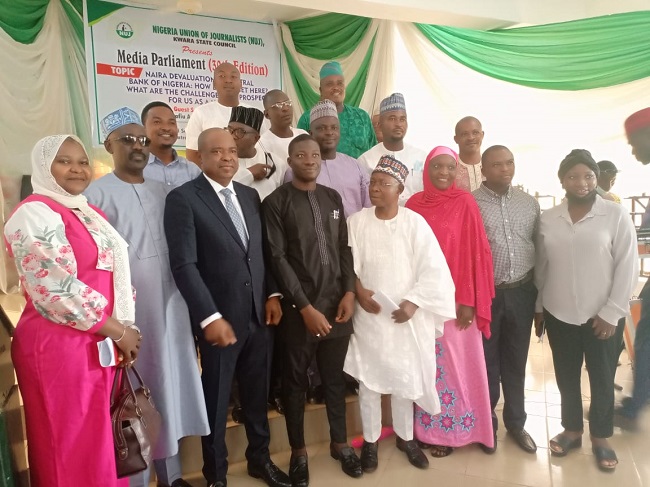 Former Chairman, Senate Committee on Banking, Insurance and other Financial Institutions, Rafiu Ibrahim, on Thursday, said that interference of politics in matters of economics by the current President Muhammadu Buhari government has eroded gains recorded during the regimes of Charles Soludo and Sanusi Lamido Sanusi governors’ of Central Bank of Nigeria (CBN).

The Senator said this in Ilorin, Kwara State capital at a lecture organised by the state council of the Nigerian Union of Journalists (NUJ).

“We have had the unfortunate ill-luck of governance. Most of the time, we get the wrong people appointed and elected into positions that they are not in any way prepared for.

“We have prioritised politics over economics, mediocrity over merit, consumption over production, savings and investments.

“The above represent the challenges that bedevil the unprecedented devastating devaluation of the exchange rate of the naira in the last 35 years.”

He recommended that “it is time to relegate politics to the background and allow economics to rule and reign when it comes to the naira exchange rate by allowing the market to determine its fair value both at the time of boom and otherwise.

“It is to stop paying lip service to institute a concrete savings culture at all levels of government; federal, state and local. Even as an individual, when you consume all your income and fail to save, you will be feeding from hand to mouth and will always be vulnerable anytime that there is drought because you have no savings to fall back on.

“It is time to diversify the economy under a truly long-term strategic plan that will turn around the fortunes of the nation away from being mono-product as is presently the case.

“It is time to promote local production and industrialization, particularly of products that are highly in demand.

“It is time to address the incessant insecurity that is eating deep into the economic life of the nation, as the devastating effects of the situation, if unattended, will make the value of the nation’s currency worse than we all can imagine.”

The Senator also traced the current woes of the Nigerian Naira to the introduction of Bureau de Change by former military president General Ibrahim Babangida.

Senator Ibrahim, who represented Kwara South in the 8th National Assembly, added that the BDCs were introduced to legalise the then unregistered black market.

He said that “the rate at which the naira depreciated in those few years probably explains why Nigerians have never gotten over the idea of a strong currency as the mark of a ‘strong’ economy. People only remember that things got worse as the naira lost ground to the dollar.

“The woes of the naira cumulated in a 1,789 per cent devaluation in eight years of that regime.”

“Oil prices have been the major determinant of the number of foreign exchange earnings of the nation, and as such have affected, and will continue to affect the exchange rate for as long as we are majorly dependent on oil.

“Management of our oil earnings and reserves have been such that we take no cognizance of the fact that the major determining factors of quantity and price are not within our full control and as such when the going is good, we should save for a rainy day.

“As a nation, we have neglected the abundant areas of agriculture to the detriment of employment, production, income, as well as foreign exchange earnings.

“We have neglected production to the extent that all our major production industries have collapsed and we have substituted local production with the importation of foreign goods.

“We have prioritized consumption as a nation over and above production, and our tastes are shaped by foreign products with local products facing too many challenges to compete with their foreign counterparts or even survive.”

In spite of the huge investment in the water sector by the government and international organisations, water scarcity has grown to become a perennial nightmare for residents of Abeokuta, the Ogun State capital. This report x-rays the lives and experiences of residents in getting clean, potable and affordable water amidst the surge of COVID-19 cases in the state…  Interference of politics eroded past economic gains

This post was written by Biola Azeez – Ilorin and was first published at tribuneonlineng.com
16-year-old author discusses infallibility of mortals in maiden book