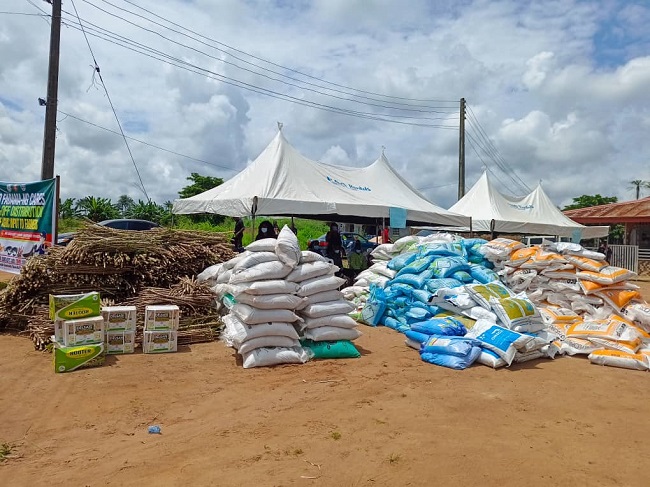 Governor Godwin Obaseki of Edo State, on Thursday, flagged off the Nigeria Coronavirus (COVID-19) Action Recovery and Economic Stimulus (N-CARES) programme to support over 12,494 smallholder farmers across the state with farm inputs.

Obaseki, during the event, which was held in the Umuegbe community in Oredo Local Government Area of the state, said the state agricultural sector had supported over 3,000 smallholder and large scale farmers.

The governor who was represented by the Permanent Secretary, Ministry of Agriculture and Natural Resources, Peter Aikhuomobhogbe, said that the government had developed 300 hectares of land in the Iguomon community, Ovia North East Local Government Area for the production of swamp rice.

According to him, a similar intervention programme was established in Warrake community, Owan East Local Government Area on 500 hectares of farmland, and Usugbenu, Ugboha and Sobe communities in Esan Central, Esan South-East and Owan West respectively, where the government empowered 1,500, farmers on the production of maize.

“Under the Oil Palm initiative, 63,000 hectares of brownfields have been made available for nine investors for the development of oil palm plantation aimed at making the state a leader in oil palm production,” Obaseki said.

According to him, the initiatives were designed to provide critical support to farmers in the state, leverage on our assets to drive development and diversify the economy with a focus on sustaining food security.

The governor further explained that the N-CARES programme domesticated in Edo and Code named EDO CARES would also support 3,341 smallholder farmers with priority on providing small tertiary irrigation with revamping of existing dams.

He added that the intervention would also provide boreholes, canals and rehabilitation of existing farm roads among others.

“The programme is going to make available agricultural assets for the production and mitigating loss and waste which will benefit 4,874 Smallholder farmers.

“It will empower them will micro-small agro-processing including cassava and rice mills, maize sheller, grain silos, blast freezers and other storage facilities.

“To strengthen our drive for food security, we will be distributing inputs to 6,227 Smallholder farmers across the value chains of cassava, poultry and fisheries,” the governor added.

Mrs Ifueko Alufohai, the State Coordinator of EDO-CARES said the Programme had become necessary as a result of the strict measure put in place to contain the spread of the COVID-19 pandemic which had impacted negatively on livelihoods.

Alufohai admonished the beneficiaries to make proper use of the inputs to create wealth for themselves.

Mr Edward Izevbigie, the state Coordinator of FADAMA-NG CARES while welcoming dignitaries to the event said N-CARES was an emergency Relief World Bank assisted, a funded programme put in place to ameliorate the adverse effect of the pandemic.

The high point of the event was the presentation of the farm inputs to the farmers by the Chief of Staff to Governor Godwin Obaseki, Osaigbovo Iyoha.

Speaking on behalf of the beneficiaries, the Secretary to Iyekogba Farmers Association, Festus Odigie, commended the governor for the initiative.

Odigie promised to ensure that the beneficiaries made good use of all farm inputs.

Others were 3,000 day-old chicks, 3000 fingerlings/juveniles, 39 farm kits and 60 poultry vaccines among others.

In spite of the huge investment in the water sector by the government and international organisations, water scarcity has grown to become a perennial nightmare for residents of Abeokuta, the Ogun State capital. This report x-rays the lives and experiences of residents in getting clean, potable and affordable water amidst the surge of COVID-19 cases in the state…    Obaseki supports Edo farmers, flags off N-CARES programme

This post was written by ‘Suyi Ayodele – Benin and was first published at tribuneonlineng.com
DPR plans N3.2trn revenue by December 2021