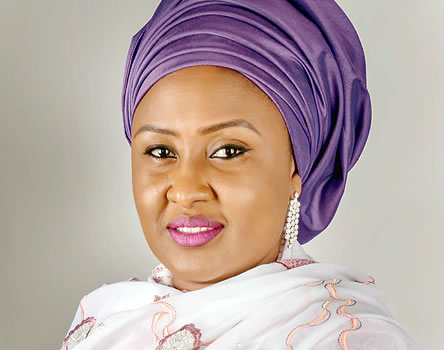 The First Lady, Aisha Buhari, has in New York called for more women representation in formal peace and security processes to complement the efforts of the African First Ladies Peace Mission (AFLPM).

Speaking at Luncheon on “Accelerating Women, Peace and Security in Africa within the SDG Agenda” at the margin of the 76th United Nations General Assembly, organized by AFLPM, she noted that women have distinguished themselves with achievements in every field of human endeavour that paved the way for more equality, solidarity and inclusion at the local, national and global levels.

Represented by Dr Mairo Al-Makura, Special Assistant to the President on Women, Peace and Director-General AFLPM, Mrs Buhari pointed out that the organization must continue to build on these successes in the months and years to come.

She assured that women can achieve incredible change, conflict transformation and sustainable peace if there is continued support and advocacy for more inclusion and participation of women and in particular young women as equal partners in society with leadership and decision-making roles in Africa and across the globe.

The wife of the president recalled that it was to remedy the poor representation of women in peace and conflicts processes that the UN Security Council since October 2000 adopted nine Women, Peace and Security (WPS) resolutions, which aim to strengthen women’s participation, protection, and rights in conflict prevention and resolution processes.

“However, resolutions to push through the WPS and SDG agenda do not reflect the reality on the ground in Africa as peace continues to elude the continent with little improvement in poverty reduction, transparency and accountability, good governance nor institutional capacity. In a world where the COVID-19 pandemic has had devastating effects on women and girls, the pandemic has largely exacerbated women’s needs and governments are struggling to address inequalities and protecting the victims of domestic violence.”

In her goodwill message, the First Lady of the Republic of Gambia, Fatoumatta Bah-Barrow, said the Sustainable Development Goals (SDGs), which aim to end poverty, protect the planet, and ensure that all people of the world enjoy peace and prosperity by 2030, strike a chord in every woman on the African continent in that, as, put together, they address issues that affect women and the girl child.

She added: “In particular, Goal 5, which seeks to achieve gender equality and empower all women and girls and Goal 16, which seeks to promote peaceful and inclusive societies for sustainable development, provide access to justice for all and build effective, accountable and inclusive institutions at all levels level hold great for the African woman and girl child.

“Both are intrinsically inter-twinned, hence the commitment of the African First Ladies Peace Mission, working with all our development partners and all levels of government in each African country, is committed to mobilizing and investing attention, time, and resources in prevention and de-escalation of conflict, violence, and instability to build the atmosphere for sustainable development.

“This becomes even more imperative given that women and children bear the brunt of conflicts, violence, and consequent lack of development.”

Mrs Barrow called on the international community, the UN, and African governments to expand and equally prioritise more meaningful participation of women in peacebuilding, conflict prevention, security and sustainable development.

She further said: “This will include women political leaders, women-oriented Civil Society Organisations and international development agencies, women leaders and organisations, down women in the homes.

“We must ramp up sensitisation efforts to ensure that every woman, including those in the rural areas, where the overwhelming majority of African women live, understands the meaning of the SDGs and her roles and rights towards the realisation of Agenda 2030.

“Only such mass participatory approach can guarantee a poverty-free, secure, peaceful, and prosperous African continent by 2030.”

Earlier in her welcome remark, Dr Al-Makura informed the audience that the vision of AFLPM is primarily to be messengers and harbingers of peace and promotion of peace on the continent and also advocating for the engagement of women in the prevention and resolution of conflicts as provided by the United Nations Security Council Resolution 1325 of October 31, 2000.

She explained: “Since inception, the AFLPM in pursuance of its mandate has, among others produced an update or survey of major conflicts in different parts of the continent. This update is fundamental to understanding these conflicts as well as mapping strategies for intervention. We are currently engaged in supporting women in fragile and conflict-affected communities in the Sahel region of Africa.

“Achieving peace and security through a gender lens approach remains a critical challenge for many communities in our member countries.

“We are doing everything in our power to reach out to those affected by war and violence with programs that have proven to be successful.

“From our work in the Sahel, to where we have provided humanitarian support to countries that have been affected by violence and terrorism.

“We are planning workshops and strategic dialogues across some countries to amplify the role of women leaders in peace and security.”

She said: “We are aware that the key element of sustaining progress on women peace and security has been through partnerships. It is in this context that the AFLPM seeks to engage as many partners as possible so we can make a significant impact on the advancement of women, peace and security agenda, gender equality, and broader SDG goals on the African continent.”

The Minister of Foreign Affairs, Geoffrey Onyeama, on his part, noted that including women in peace processes will not only create a broader range of perspectives in addressing conflicts and concerns of all stakeholders but also increases inclusivity and hastens the processes of conflict resolutions.

Represented by Abiodun Adejola, the Permanent Representative of Nigeria to the United Nations Office at Geneva, Onyeama noted that in addition, peacemaking strategies that include women are more likely to generate ownership and last longer on our actions regarding shared challenges.

“In the face of persistent and complex violent conflicts and rising backlash against women’s rights in Africa, it is pertinent that our continent steps up efforts and bolster solidarity. We should put actions in motion to take more seriously the need to accelerate the full inclusion of women in peace and security on the continent, especially if we must achieve the SDGs and the Agenda 2063.”

In spite of the huge investment in the water sector by the government and international organisations, water scarcity has grown to become a perennial nightmare for residents of Abeokuta, the Ogun State capital. This report x-rays the lives and experiences of residents in getting clean, potable and affordable water amidst the surge of COVID-19 cases in the state…Aisha Buhari demands more  Aisha Buhari demands more

This post was written by Leon Usigbe – New York and was first published at tribuneonlineng.com
Establishment of farm estates, Greek gifts of fatal Trojan horses —Afenifere