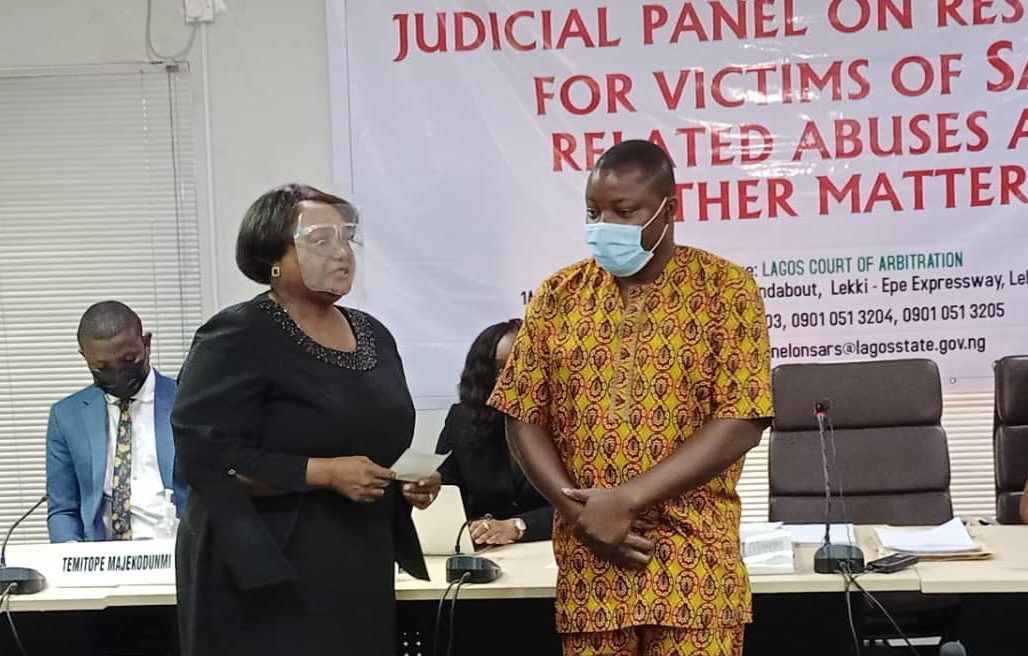 The Lagos State Judicial Panel of Inquiry and Restitution for SARS-related abuses and other matters has awarded the sum of N19.2 million in compensation to victims of police brutality.

PREMIUM TIMES reported how Ayomide Oyemide, a minor who has now been compensated with N1 million, was handcuffed by the police officers attached to the Ajah area of the state.

Mr Oyewunmi said that it took the intervention of the station’s DCO and instruction from the “higher authority not to detain the minor in the cell” adding that his son was traumatised following the incident.

His father had in May on his behalf demanded financial compensation of N25 million.

Doris Okwuobi, the panel’s chairperson, in her ruling said the 14-year-old was subjected to fear and exposed to danger and is entitled to compensation and apology from the police.

Also, a relative of the late Adeshina Adeosun received N10 million compensation on behalf of their family.

Funmilayo Adeosun, the deceased child who witnessed how her father was fatally shot by the police, told the panel in February that his body was also seized by the police attached to the Olosan station in Mushin.

Mrs Okwuobi ordered the Lagos police to provide the deceased body for burial.

She advised that the Nigerian police officers be trained on how to handle a crowd and a riotous situation.

She also recommended that the security operatives should be psychologically evaluated adding that the police must resist random shooting.

COVID-19: Edo civil servants get 7-day ultimatum to get vaccinated

This post was written by George Ogala and was first published at www.premiumtimesng.com
COVID-19: Bring your herbal cure for clinical trials, Sanwo-Olu tells traditional medicine practitioners