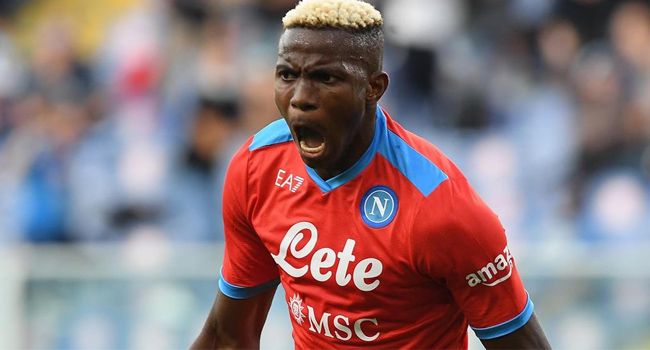 Super Eagles forward Victor Osimhen says he is determined to do better following a stunning start to the season.

The Nigerian scored a brace as Napoli outclassed Sampdoria 4-0 in a Serie A game on Thursday evening to take his goal tally in all competitions to five.

But Osimhen, who admitted the impact of the COVID-19 and injury on his performance last season, has expressed readiness to continue working hard for the remainder of the campaign.

“Last year I had COVID and then got a bad injury. I’m in good shape this season,” the 2015 U-17 World Cup winner told Napoli’s website, one week after he netted a brace against Leicester City in a Europa League game.

“I’m training consistently and I’m listening to the advice the coach gives me and the help I get from the team. I’m pleased with what I’m doing but I know I need to continue working hard. We all need to continue down this track.”

He opened the scoring chart in the 10th minute after beating  goalkeeper Emil Audero and completed his brace five minutes into the second half before Piotr Zielinski sealed the win for the Parthenopeans.

READ ALSO: Football Must Do More To Combat Racism Than The Take Knee – Lukaku

Shortly after the match, an excited Osimhen singled out the club’s coach, Luciano Spalleti for praise following his impressive form this term.

“I’m really happy,” he added.  “It was important for me to start the season well and I want to thank the coach for his confidence in me. I’m honored to play for this club.”

Osimhen’s recent form, reminiscent of his start to life in Naples, has also caught Spalletti’s attention.

The Italian, 62, lauded the Nigerian’s technical abilities and commitment to doing more.

“Victor is doing well and working hard for every ball,” the coach said. “He finishes his chances very well. I think we did well to read the game, both when there were challenges and when there were more positive moments.”

Before the Sampdoria game, the 22-year-old was also on target as Napoli thrashed Udinese in another league match on Monday.

Osimhen began his Serie A career in the 2020/2021 season following a reported £45m switch from Ligue 1 side, Lille.

This post was written by Emmanuel Egobiambu and was first published at www.channelstv.com
Epic Seeks ‘Fortnite’ Return On Apple’s App Store