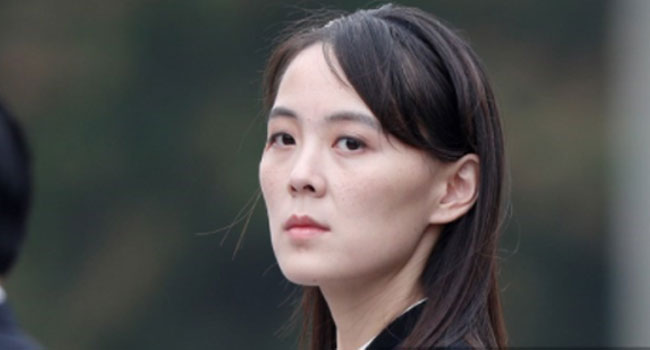 The influential sister of North Korean leader Kim Jong Un on Friday said it was “admirable” of the South to propose a formal end to the Korean War but demanded Seoul first drop its “hostile policies” towards Pyongyang.

Kim Yo Jong’s remarks, carried by Pyongyang’s official KCNA news agency, were in response to South Korean President Moon Jae-in’s recent calls for declaring an official end to the 1950-53 conflict that ended in a truce, not a peace treaty, leaving the two sides technically at war for more than half a century.

In a speech at the UN General Assembly earlier this week, Moon proposed the declaration of an end to the conflict that broke out 71 years ago, stressing such an act would “make irreversible progress in denuclearisation and usher in an era of complete peace”.

Kim, a key policy adviser to her brother Kim Jong Un, said it was an “admirable idea” to propose a formal end to the war but insisted the South should remove its hostile attitude first.

Making such a declaration with “double-dealing standards, prejudice, and hostile policies” still in place “does not make any sense,” she said.

“For the termination of the war to be declared, respect for each other should be maintained and prejudiced viewpoint, inveterate hostile policy, and unequal double standards must be removed first,” she said.

She added making such a declaration would “hold no water and would change nothing” under current conditions.

But the North would be willing to have talks on improving ties with Seoul if the South withdrew hostility “after breaking with the past when it often provoked us”.

Kim Yo Jong last week accused Moon of “slander” after both Koreas carried out missile launches.

North Korea carried out two missile firings this month alone, one involving a long-range cruise missile and the other short-range ballistic missiles.

Moon described Pyongyang’s recent launches as “provocations” when he oversaw a successful test-firing of a submarine-launched ballistic missile (SLBM) last week, making the South one of a handful of nations with the advanced technology.

That prompted Kim Yo Jong to condemn Seoul’s “illogical attitude that describes their similar behaviour as a legitimate action to support peace, and ours as a threat to peace”.

Communications between the North and South have largely been cut in the aftermath of a second US-North summit in Hanoi that collapsed in February 2019 as then-president Donald Trump and Kim Jong Un couldn’t agree on the terms of an agreement.

This post was written by Rejoice Ewodage and was first published at www.channelstv.com
BBNaija S6: Biggie tasks Nini to prank housemates with 24-hour exit