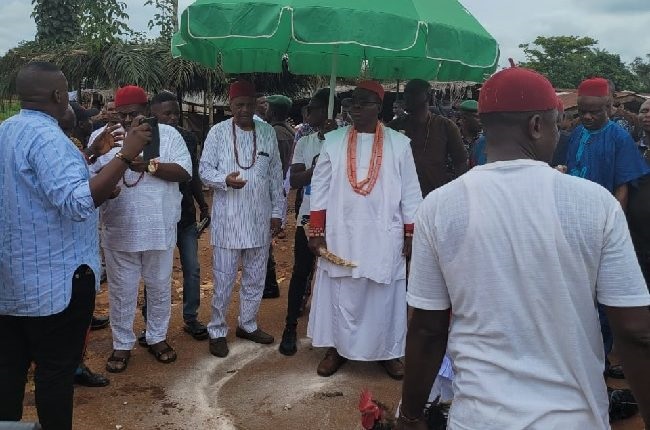 The monarch is the brother of Nigeria’s former Minister of Finance and current Director-General of the World Trade Organisation (WTC), Dr Mrs Ngozi Okonjo-Iweala, who narrowly escaped attacks by suspected cultists during a visit to Otulu community for prayers last week.

In a statement signed and made available to journalists, on Friday, by his media aide, Greg Okwumbu,
the Obi of Ogwashi-Uku said his kingdom accords respect and desired to cohabit in peace with his neighbouring communities.

Obviously reacting to a publication where the monarch of Issele-Azagba HRM Agbogidi, Obi Francis Jideuwa, on Thursday, who, while granting a press briefing, claimed Otulu community is not part of Ogwashi-Uku Kingdom but his, HRM Okonjo II, urged neighbouring communities to respect historical, political and geographical facts on boundaries.

“We are a very respectful community and we desire to live in peace. We do not want any unnecessary provocation from our neighbours.

“We wish to request that our neighbouring communities, with who we have tried to live in peace for decades, respect our boundaries,” he admonished.

The Ogwashi-Uku monarch disclosed that from time immemorial, Otulu community, nay Issele-Azagba land, were part of his kingdom and as a fact, lent out lands to Issele-Azagba to farm at inception.

Okonjo II, who cited gazetted references including court judgements to back his ownership claim, said “Otulu Ogwashi-Uku historically is a farming settlement under our Agidiasei Quarters.

“Otulu Ogwashi-Uku was separated from its sister community Edo Ogwashi-Uku when the current Lagos-Benin Expressway was built, effectively putting both communities on either side of the expressway.

“So, from a historical, geographic and political point of view, Otulu Ogwashi-Uku is and will remain part of Ogwashi-Uku Kingdom.

Over 13,777 NDDC projects were compromised —Report

“We are aware that some communities are rushing to make claims about Otulu Ogwashi-Uku in light of the unfortunate incident which happened last week.

“We are very prepared to defend our communal land to ensure that no outside community interferes with the land handed to us by our ancestors.

“We will not permit any distortion of the facts or the truth…we have relevant legal documents to back up our claims.

“Let us end by responding to a story we heard from HRM Agbogidi Obi Francis Jideuwa, the Obi of Issele-Azagba claiming ownership of Otulu.

“We have a great deal of respect for His Majesty and we are sure he is misquoted and the stories supposedly from him about Otulu Ogwashi-Uku are false.

“We know the history and relationship between our Azagba Ogwashi-Uku Community and Issele Azagba. We provided farmlands to them which metamorphosed to the present Issele Azagba community,” he claimed.

This post was written by Ebenezer Adurokiya – Warri and was first published at tribuneonlineng.com
Sokoto govt shuts telecoms services in 14 LGs over banditry