Why gridlock on Lagos-Abeokuta Expressway has persisted – Agency

Why gridlock on Lagos-Abeokuta Expressway has persisted – Agency 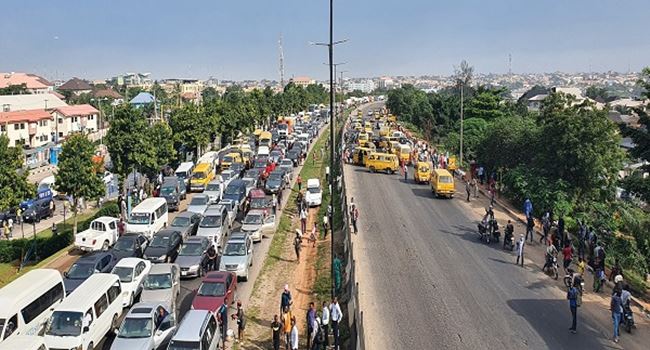 The Traffic Compliance and Enforcement Corps (TRACE) in Ogun has blamed impatience on the part of motorists for the traffic gridlock on the Lagos-Abeokuta Expressway and environs on Friday.

The News Agency of Nigeria (NAN) reports that motorists and commuters plying the Sango-Ota/Lagos-Abeokuta highways experienced challenges getting to their destinations due to the ongoing construction at Tipper Garage on the Lagos-Abeokuta Expressway.

NAN reports that the traffic gridlock led to commercial drivers withdrawing their vehicles from the roads which left many commuters stranded at bus stops and some had to resort to trekking to their various destinations.

The few available commercial vehicles were seen taking the inner routes to beat the gridlock around Dalemo, Sango-Ota, Joju, and Iyana-Illogbo axis on the Lagos-Abeokuta Expressway.

Reacting to the development, Temitope Oseni, the Owode-Ijako Unit Commander of TRACE, in an interview with the News Agency of Nigeria (NAN) in Ota, Ogun, appealed to motorists and other road users to exercise patience on the road.

Mrs Oseni said the traffic gridlock was caused as a result of some motorists who failed to exercise little patience around Tipper garage area where the road had been diverted.

“We expect them to display little patience and maturity so that everybody can get to their different destinations on time, but the reverse is the case.

“Some of them commit lane indiscipline by forming more than one lane, leading to gridlock at Tipper garage that had extended to Sango-Ota axis.

The unit commander enjoined motorists and other road users to cooperate with TRACE personnel trying to control the traffic at Tipper garage to Iyana-Illogbo area.

She also warned commercial drivers to desist from parking indiscriminately to pick passengers as any erring driver caught would be arrested and their vehicles impounded.

Mrs Oseni also urged traders selling on the roadside to vacate the area because they were also contributing to traffic jam on the expressway.

Mojeed Alabi, a passenger at Sango-Ota bus-Stop, described the development as unbearable as he had been at the bus-Stop for over three hours trying to board a bus.

Mr Alabi said that he spent over five hours from Sango-Ota under bridge to Ifo area on Thursday due to the traffic gridlock.

“We are appealing to the construction company working on the road to expedite actions so that the hardship people are going through can soon be over,’’ he said.

This post was written by Agency Report and was first published at www.premiumtimesng.com
Yiaga urges National Assembly to expedite action on Constitution Review, Electoral Amendment Bill